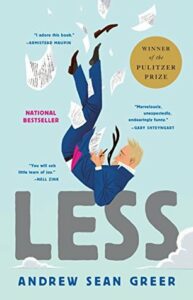 A scintillating satire of the American abroad, a rumination on time and the human heart, a bittersweet romance of chances lost.-Lee Bordeaux Books; 2017

In an effort to ‘casually’ avoid the wedding of his 9-year f*ck boy and outrun turning 50, Arthur Less accepts every job, award ceremony, teaching assignment, and vacation invitation to be as far away as possible.  He encounters former lovers, rivals, old friends, locals, and his publisher on his travels from New York, across the world to Japan.

Less is told his writing is spoony, that’s he’s bad gay, told people over 50 are too old for love and that a relationship ending after 20 years is a great success.  While he ruminates on these statements he never comes to a conclusion of his own on the matters, except that he is a fool.  Which a book club would have a great time arguing for or against.  Does throwing together a trip around the world to places he’s never been, make him a fool or adventurous?  Or as the omnipotent 3rd party narrator would have you believe, brave?  Does avoiding love make you sensical or an idiot?

The style of writing that quickly flits between the past and the present is as The New York Times hails; inspired, lyrical, and elegiac. And is one of the few books I found myself reading more than once and I think you should at least read once yourself. –Buy it!