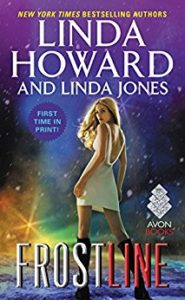 Lenna is Strength, a manifestation of the Tarot card, and powerful beyond reckoning. But when she’s pulled into the human realm and tasked with protecting a young boy, everything is thrown into chaos. Lenna’s not supposed to be here, interacting with mortals. She’s definitely not supposed to be drawn to the sexy mercenary sent to retrieve her by any means necessary.

As a Hunter for magical beings, Caine’s duty is simple: return this compelling, impossibly attractive woman and secure the long lost Tarot deck that made travel between worlds possible. Instead he’s drawn into Lenna’s dangerous rescue mission and blindsided by his growing feelings. But there is more than one enemy to contend with. And as the clock runs out, failure means not just the loss of an innocent life and the woman Caine has come to love, but the destruction of Lenna’s entire world.  –Harper Audio; 2016

Frost Line has a lot of great concepts.  The idea of a humanoid manifestation of a Tarot card is what peaked my personal interest.  Now if Frost Line had fleshed out any of those concepts and ideas it might have actually been a great story. END_OF_DOCUMENT_TOKEN_TO_BE_REPLACED