Greece in the age of heroes. Patroclus, an awkward young prince, has been exiled to the court of King Peleus and his perfect son Achilles. By all rights their paths should never cross, but Achilles takes the shamed prince as his friend, and as they grow into young men skilled in the arts of war and medicine their bond blossoms into something deeper – despite the displeasure of Achilles’ mother Thetis, a cruel sea goddess. But then word comes that Helen of Sparta has been kidnapped. Torn between love and fear for his friend, Patroclus journeys with Achilles to Troy, little knowing that the years that follow will test everything they hold dear.-Bloomsbury Publishing, 2011 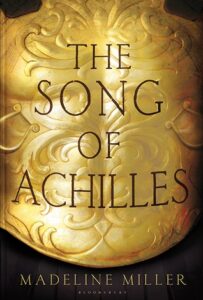 From Patroclus’ point of view, from which the story is told, we see Achilles as one hell of a lyre player, beautiful, physically capable, and confident, not bordering on arrogant just yet. There is no wonder why Patroclus fell for him. Too bad Patroclus has neither looks, charisma, physical prowess, intellect, anything, to make him worthy of Achilles other than being chosen by him a la Pretty Woman. But just like I didn’t understand Achilles’ love for Patroclus, nor did I understand the Greek’s worship of Achilles.  Before the Trojan War, the myth from which Achilles is famed, he hadn’t killed a man, won a competition other than a track meet or gone on any adventures.  Hell, he was in hiding when the Greeks came to recruit him to fight to return Helen of Sparta from Troy.  How he was allowed to name himself ‘Best of the Greeks’ is beyond me. Fortunately for the Greeks, Achilles more than lived up to the hype, decimating hundreds of Trojans in a single blow. To be a hero in this time you only needed to be a fierce warrior, with a good song sung about you around the campfire, didn’t matter what or who you fought for, the prize was the glory.

It is painful to see how war and pride changed Achilles from the boy Patroclus knew, but the bond between them is built on such a strong foundation of friendship, that you never fear it will tear the two apart. Homosexual relationships between men are treated like childhood blankies.  It’s something you do when you’re a kid but should grow out of by adulthood or be shamed for it.  You want to tell the ‘Best of the Greeks’ to ‘put his toys away?’ I didn’t think so, and none of the Greek generals had the balls to say anything about it either. But they did have the balls to die and let others die for pride, glory and the promise of riches.  The war tactics, diplomacy, the dividing of spoils, including women, interactions with the gods, (celebrity appearances from Apollo, the god of the sun, and Odyessus from the Odessy!) the power of prophecy, and the Greek war camp turning into a city-state of its own after years of war, helped you learn the Greek culture of the time and make the story an enjoyable adventure. –(High) Borrow it.