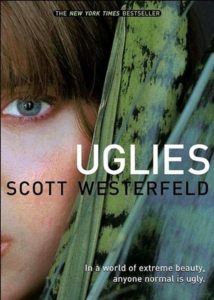 But Tally’s new friend Shay isn’t sure she wants to become a pretty. When Shay runs away, Tally learns about a whole new side of the pretty world– and it isn’t very pretty. The authorities offer Tally a choice: find her friend and turn her in, or never turn pretty at all. Tally’s choice will change her world forever…–Simon Pulse, 2005

In this youth-dominated post-apocalyptic world, people are separated by ugly and pretty.  Because when you’re pretty, what is there to fight about?  No more unfair advantages for the tall and attractive for jobs, political office-hell, life in general.  No more racism and discrimination because everyone looks the same after they ‘turn’ or have the surgery that will make them pretty at age 16.  But until then you’re ugly.  You live separated from your family in school dorms in Uglyville till you turn, and then can cross the river and move into Prettyville. No, I didn’t make up those names. In Prettyville everyone is pretty and does nothing but party all day.  How this society thrives or even affords a population that adds nothing to it isn’t explained, but hey you’re pretty now, what do you have to worry about?

Oh, if only everyone felt that way.  Tally’s friend Shay has the crazy notion that her ugly ass is fine as she is and runs away to a community of uglies living in nature to avoid getting the surgery.  Which would have been fine if the authorities didn’t tell Tally that her own surgery was dependent on finding where Shay went and leading them to it.  A slow anti-climatic adventure ensues as Tally makes her way through the wilderness and ruins of our world to the community of rogue uglies.

While there, some dude Tally hadn’t thought of twice, (because like every other character, he was nothing but a plot device with no personality or interesting dialogue) calls her beautiful, she forgets years of brainwashing about the standards of beauty, that until then, she wholeheartedly believed in. From there she decides, despite not working a day in her life and having had every comfort provided to her, that she prefers the struggle of living in the wilderness.  Especially when she learns the true cost of being pretty. Living in today’s social media, looks-obsessed, and discrimination riddled world, it is a price the rest of us would gladly pay. –(Low) Borrow it.