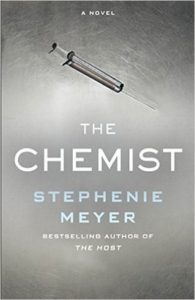 She used to work for the U.S. government, but very few people ever knew that. An expert in her field, she was one of the darkest secrets of an agency so clandestine it doesn’t even have a name. And when they decided she was a liability, they came for her without warning.

Now, she rarely stays in the same place or uses the same name for long. They’ve killed the only other person she trusted, but something she knows still poses a threat. They want her dead, and soon.

When her former handler offers her a way out, she realizes it’s her only chance to erase the giant target on her back. But it means taking one last job for her ex-employers. To her horror, the information she acquires only makes her situation more dangerous.

Despite not caring for the Twilight series, that Meyer is most famously known for, I did overall enjoy The Host, which prompted me to give The Chemist a chance.

The book starts off slow as Meyer pats herself on the pat for several pages to tell you of all the cool devices her leading lady Juliana,…er ah Alex  – whatever her name is, comes up with to safe guard herself against the unnamed government agency that is out to finish the job of killing her.  Despite all the precautions of booby trapped doors and poisoned jewelry, she forgot to fail safe herself against her own stupidity.   END_OF_DOCUMENT_TOKEN_TO_BE_REPLACED 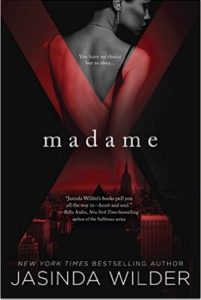 Hired to transform the uncultured, inept sons of the wealthy and powerful into decisive, confident men, Madame X is a master of the art of control. With a single glance she can cut you down to nothing, or make you feel like a king.

But there is only one man who can claim her body—and her soul.

Wilder does a great job of illustrating the two sides of Madame X. The stone faced professional behavior consultant she shows her clients and the vulnerable woman who is growing frustrated with the limits of her life, when she is alone.  END_OF_DOCUMENT_TOKEN_TO_BE_REPLACED 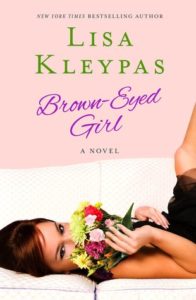 Wedding planner Avery Crosslin may be a rising star in Houston society, but she doesn’t believe in love–at least not for herself. When she meets wealthy bachelor Joe Travis and mistakes him for a wedding photographer, she has no intention of letting him sweep her off her feet. But Joe is a man who goes after what he wants, and Avery can’t resist the temptation of a sexy southern charmer and a hot summer evening.

After a one night stand, however, Avery is determined to keep it from happening again. A man like Joe can only mean trouble for a woman like her, and she can’t afford distractions. She’s been hired to plan the wedding of the year–a make-or-break event.

But complications start piling up fast, putting the wedding in jeopardy, especially when shocking secrets of the bride come to light. And as Joe makes it clear that he’s not going to give up easily, Avery is forced to confront the insecurities and beliefs that stem from a past she would do anything to forget.

Avery’s history with men has given her good reason to be hesitant about starting a relationship with Joe, let alone anyone. That doesn’t give her a good reason to be rude and patronizing to him. “Oh you’re one of those Travises?”or “You’re clearly a player.” and other condescending remarks. In addition to being rude, Avery doesn’t mean what she says and her words don’t match her actions. She tells Joe there is no chance of a relationship between them, even petulantly tells him that she wouldn’t touch him with a 10 foot poll, but then pouts when he doesn’t call and is confused why he won’t kiss her. END_OF_DOCUMENT_TOKEN_TO_BE_REPLACED